Sapporo, Japan - Members of the Northern Committee (NC)* of the Western and Central Pacific Fishery Commission (WCPFC) who met this week to discuss tuna management measures achieved too little too late to save the Pacific Bluefin tuna, says WWF.

"Despite tuna stocks falling by 90 per cent and the current catch being mainly juveniles yet to breed, the committee couldn't reach agreement on a long-term stock rebuilding plan," said Dr Aiko Yamauchi, Head of WWF-Japan's Fishery and Seafood Project.

WWF is calling on the Northern Committee to reconsider its position ahead of the annual meeting of the WCPFC expected to take place in December this year. In the absence of such commitments, WWF will consider seeking the immediate suspension of Pacific Bluefin fishing.

One step taken by the Northern Committee was to recommend developing a Bluefin tuna "emergency rule", allowing temporary suspension of the fishery in the event of a collapse of recruitment.
Furthermore, a tangible catch documentation scheme is being developed which requires fishing and trading nations to ensure that the fish entering their markets are harvested in accordance to conservation and management measures (a 50% reduction of juvenile catch). 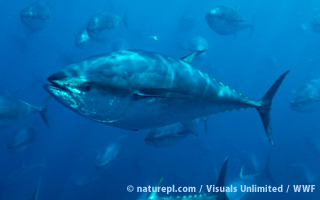