Gland, Switzerland - Next week, world leaders will meet in Paris where a global climate deal is expected to be agreed.

Leaders are under pressure to ensure that they conclude a deal that meets the demands of science and reduces greenhouse gas emissions sufficiently to keep global warming below 1.50C. Scientists agree that this is the upper limit for the survival for many communities and ecosystems, particularly coral reefs, Arctic ice regimes, and Pacific Island states among many others.

The urgency of concluding an ambitious deal was underscored with recent news that global temperatures had risen to 10C above pre-industrial levels, reaffirming scientists' predictions that 2015 will be the hottest year in recorded history.

Marco Lambertini, Director General of WWF International, said: "Science is telling us that we need to act quickly on climate change and Paris is our moment. We need a strong climate plan that will cut carbon, promote renewable energy, provide promised finance and protect powerful carbon sink ecosystems like forests and the ocean. Only strong action in Paris can help meet the scale and pace needed to avoid runaway climate change and secure a safer future for us all."

Samantha Smith, leader of WWF's Global Climate and Energy Initiative , said: "We are now in a race against time and the relentless logic of climate change. Everyone understands that and our sense is that all parties want an agreement. They now need to turn difficult issues into concrete decisions that match the demands of science and are fair to everyone. Actions before 2020 - especially in growing renewable energy and energy efficiency, and providing finance and technology - are essential if we are to keep global warming to less than 1.50C," she said.

Tasneem Essop, head of WWF's delegation to COP21 said: "There can be no compromise on the level of ambition we need to address the climate crisis. The UN climate negotiations in Paris will be the most important global moment for progress on climate action since COP15 in Copenhagen (2009). So it has to set us up for the next phase of our work. We need decisions that will set the current level of efforts as the floor so that climate action will get stronger and stronger on a regular basis to close any remaining gaps in ambition."

The climate agreement that comes out of the Paris talks needs to be fair, ambitious and transformational with science and equity at its heart. Governments need to act with urgency to ensure that emissions peak before 2020, deliver the promised US$100 billion per year in climate finance by 2020, and bring down emissions through concrete actions by governments, cities, private sector and individual citizens.

The Paris meeting is an important opportunity to protect the vulnerable people and natural systems that are disproportionately impacted by climate change. To be effective, the climate deal should include a global goal for adaptation and provide strong solutions to address loss and damage due to climate change.

"Political leaders represent ordinary people across the world who are facing the devastating impacts of climate change. They must be bold and decisive in putting the world on a path that is safer for people and planet," said Smith. 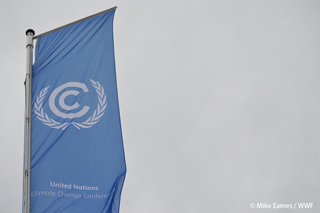