South Africa today announced its first decrease in rhino poaching since 2007, but this slight improvement was offset by an alarming increase in the number of rhinos killed in neighbouring countries.

South Africa's Minister of Environmental Affairs, Edna Molewa, revealed that 1,175 rhinos were lost in South Africa in 2015 - slightly down from the record 1,215 in the previous year.

However, at least 130 rhinos were poached in Namibia and Zimbabwe during the same period - up almost 200 percent from 2014.

"After seven years of increases, a decline in the rate of rhino poaching in South Africa is encouraging and the result of the government's leadership and the tireless efforts of so many committed people," said Carlos Drews, WWF Director, Global Species Programme. "However, the rate remains unacceptably high - and soaring poaching levels in Namibia and Zimbabwe are cause for serious concern".

While poachers are still focusing primarily on South Africa, official figures from Namibia and Zimbabwe suggest that criminal networks are expanding their reach across the region - targeting rhinos in previously secure areas.

These three countries are home to nearly 95 per cent of all remaining African rhinos.

"We desperately need co-ordinated international efforts by police and other law enforcement agencies to combat the organised criminal syndicates trafficking rhino horn across southern Africa and beyond," said Jo Shaw, Rhino Programme Manager for WWF-South Africa. "Major transit and consumer countries, such as Mozambique and Viet Nam, need to take urgent law enforcement steps to stop the trafficking of, and reduce demand for, illicit wildlife products."

Last week, the Convention on the International Trade in Endangered Species of Wild Fauna and Flora (CITES) Standing Committee ruled that Mozambique and Viet Nam should report on a range of activities targeted at stopping rhino crimes by 30 June 2016, including improved prosecutions and the use of specialized investigation techniques to expose those organizing the illegal trafficking.

The poaching figures were released a day after the South African High Court dismissed the government's application to appeal an earlier ruling lifting a moratorium on the domestic sale of rhino horns.

WWF emphasises that stopping rhino poaching is not just a law enforcement response, but also requires the involvement of local communities around protected areas.

"The infiltration of these communities by sophisticated criminal gangs not only threatens rhinos, it also compromises the safety and sustainable development of the people living in these communities," said Shaw.

"Local communities can help tackle wildlife crime, but only if they see themselves as active partners in conservation with a real stake in protecting wildlife, not just as pawns in a fight between law enforcement officers and international criminal syndicates." 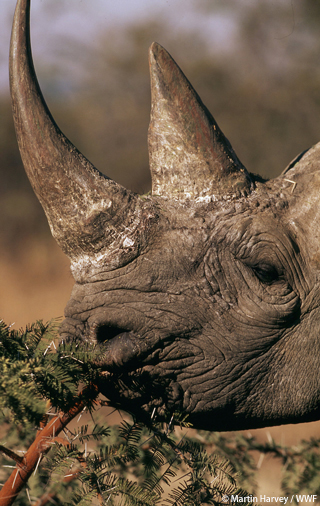 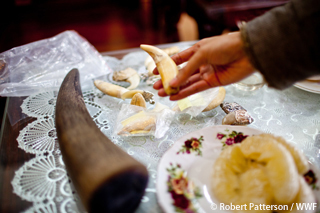 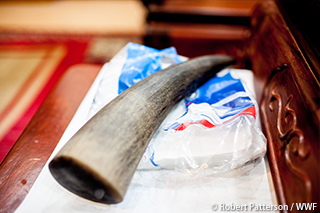 A rhino horn and tiger teeth for sale on the table of a black market animal trade dealer at his home in Hanoi, Vietnam. Vietnam is the world's largest recipient of illegal rhino horn from South Africa.