New global strategy to save sharks and rays

A group of international conservation organizations launched a new strategy today to combat the decline of sharks and closely related rays, while warning that the rays are even more threatened and less protected than the higher profile sharks.

The call for greater inclusion of rays in conservation action plans is part of "Global Priorities for Conserving Sharks and Rays: A 2015-2025 Strategy," released today in conjunction with a Convention on Migratory Species (CMS) meeting on shark conservation currently underway in San José, Costa Rica.

While calling on countries across the globe to take urgently needed actions to conserve and rebuild vulnerable populations of both sharks and rays, the 10-year strategy document emphasizes that, as a group, rays - including skates, stingrays, sawfishes, guitarfishes and devil rays - should receive as much attention and investment as their better known relatives, the sharks.

The approximately 650 species of rays include shark-like rays, such as the critically endangered smalltooth sawfish and Brazilian guitarfish.

"Overfishing due to under-management is the single most important threat to sharks and rays," said WCS Sharks and Rays Coordinator Amie Bräutigam. "Improvements in fisheries management and expansion of conservation efforts - for rays in particular - form a major part of this new strategy."

The global strategy was produced on the basis of extensive data analysis and synthesis by experts from Shark Advocates International, Shark Trust, TRAFFIC, Wildlife Conservation Society (WCS), and WWF, with technical guidance and input from the International Union for Conservation of Nature (IUCN) Shark Specialist Group. These organizations have partnered to implement this strategy through the Global Sharks and Rays Initiative.

"We are eager to share our global shark and ray conservation strategy with governments, and to discuss concrete steps toward the many shared goals that are ripe for action," said Sonja Fordham, President of Shark Advocates International. "Although the challenges are daunting and many questions remain, the tools and resources are already sufficient to meet CMS obligations for protecting many endangered rays and limit the catch of many heavily fished sharks."

Along with highlighting the need for more attention to rays, the strategy emphasizes that science-based limits on shark and ray fishing and trade are urgently needed to end overfishing and ensure sustainability.

"Some shark and ray populations are capable of supporting fisheries in the long term," said Ali Hood, the Shark Trust's Director of Conservation. "Sustainable use is a pragmatic approach to conservation, which values the natural world, the importance of livelihoods, the cultural significance of products, and the need to minimize waste through full utilization. It also requires a genuine commitment to science-based management of populations - a key objective of this global ten-year strategy."

Glenn Sant, TRAFFIC's Fisheries Programme Leader, cautioned: "Shark and ray protection measures are only as good as their actual implementation. Ensuring the traceability of fisheries products along the trade chain is essential to assess the effectiveness of any regulations and ultimately in bringing about real conservation benefits for the species affected."

For shark and ray species listed under the Convention of Migratory Species, the authors have called on member countries to ensure that several key steps are taken in line with convention obligations, including: establishing strict national protections for all five endangered sawfish species and all manta and devil rays; and adopting national and regional fishing limits for heavily-fished, highly migratory sharks, such as mako, hammerhead, and thresher sharks.

Demand for shark fin in Asia has long been considered the major driver for the overfishing of sharks, but the strategy highlights recent findings that market demand for shark and ray meat is also significant, and on the rise.

"The volumes of shark and ray meat traded internationally have doubled since the 1990s and are now considered as important as shark fin in driving overfishing of these animals," noted Andy Cornish, Shark and Ray Initiative Leader of WWF International. "Driving major reductions in the global demand for shark and ray fins and meat, the vast majority of which are currently from unsustainable and untraceable sources, is an integral part of the strategy."

The strategy also emphasizes that nearly half of the world's shark and ray species have been classified by the IUCN as "Data Deficient," meaning that information is insufficient to assess the health of their populations, which can further hinder conservation action.

"Our analyses for the IUCN Red List of Threatened Species reveal a quarter of the world's cartilaginous fishes as at risk of extinction. A major shift in effort is needed to prevent the extinction of 70 most endangered species - sawfishes, guitarfishes, wedgefishes, freshwater sharks and rays - and to clarify the conservation status and needs of the 600 Data Deficient and newly discovered species," said IUCN SSG co-chairs Nick Dulvy and Colin Simpfendorfer.

The Global Sharks and Rays Initiative is supported in part by the John D. and Catherine T. MacArthur Foundation and the Leonardo DiCaprio Foundation. 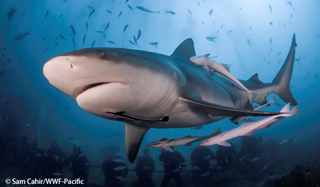 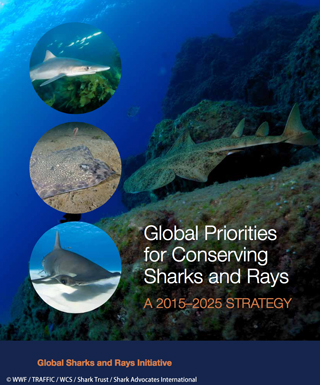 Global Priorities for Conserving Sharks and Rays: A 2015-2025 Strategy 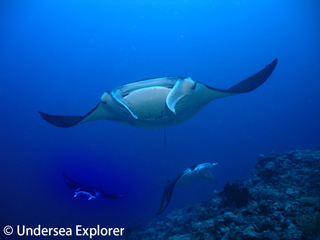 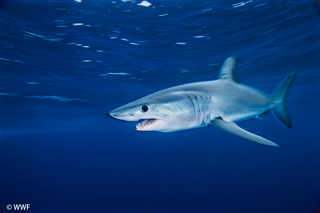 A Shortfin mako shark (Isurus oxyrinchus) off the coast of California, United States. 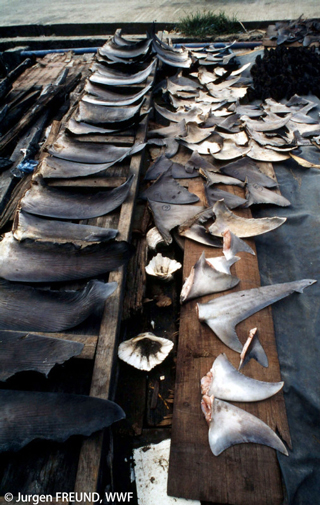