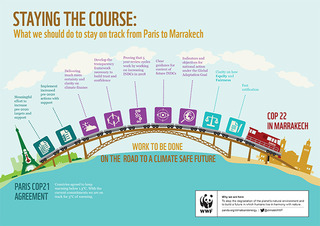 (Gland, Switzerland 11 May 2015) - Climate negotiators will have to give substance to important elements of the new global deal on climate change if they want to deliver on their promise to try to keep warming under 1.5° Celsius above pre-industrial temperatures. The meeting in Bonn, Germany is the first opportunity for governments to add content to key elements of the climate agreement since its adoption in Paris last year.

This first formal meeting after the Paris agreement is where governments must demonstrate they will deliver on the promises made, says Samantha Smith, leader of WWF's Global Climate and Energy Initiative.

"The Paris Agreement commits countries to their best efforts to keep warming under 1.5° Celsius above pre-industrial times. 1.5° Celsius of warming is the line in the sand for many vulnerable countries, communities and ecosystems. To fulfil this commitment countries urgently need to increase their national efforts to cut emissions, particularly through scaling up renewable energy, getting rid of dirty fossil fuels, protecting forests and delivering climate finance," says Smith.

Current national commitments put us on a path to a global temperature rise of at least 3°Celsius, unless we increase climate action, including, but not limited to, conserving forests and reducing emissions from land use.

Josefina Braña-Varela, WWF's senior director for Forest and Climate in the Forest Programme says, "Ambitious action on forests and land is crucial for keeping global temperatures well below 1.5° Celsius and guaranteeing the long-term stability of the global climate. Their formal inclusion in the Paris Agreement is proof of the vital role that forests play in tackling climate change, but forests should not be used as an excuse for inaction in other sectors."