Situated in an area of the western Pacific Ocean known as the Coral Triangle, the new park will help protect almost 1 million hectares of coral reef, mangrove, seagrass and productive fishing grounds including more than 50 islands. The establishment of the park will facilitate the implementation of targeted conservation measures to benefit both the environment and local communities living in one of the world's most biodiverse marine ecosystems.

"After such a long effort, it is great to have achieved landmark protection for this rich home of marine biodiversity," said Dato' Dr Dionysius Sharma, CEO of WWF-Malaysia. "The Tun Mustapha Park is a global symbol of how we can collectively commit to serving nature and humanity." 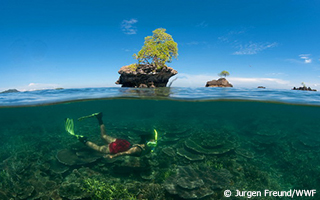 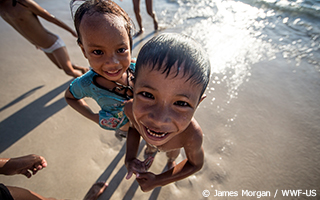 Children play on Simpang Mengayau beach in the north west tip of Borneo, an area that is an emerging eco tourism destination in the Tun Mustapha Park.

Tun Mustapha Park boasts more than 250 species of hard corals, around 360 species of fish, endangered green turtles and dugongs as well as significant primary rainforest, mangroves, and seagrass beds, supporting the food security and livelihoods of thousands of people. However, overfishing, destructive fishing and pollution have threatened its unique ecosystem in recent years, highlighting the need for sustainable management.

The park's gazettement, which comes after more than 13 years of work led by Malaysia's Sabah Parks with government agencies, local communities, international partners, and support from non-governmental organisations including WWF-Malaysia, will pave the way for intensified efforts to address the pressures on the area's fragile resources.

"The establishment of Tun Mustapha Park will boost the conservation and biodiversity of this uniquely rich natural environment," said Marco Lambertini, Director General of WWF International. "This will also help ensure the sustainable management of the significant marine resources in the area that support jobs, livelihoods and food security. The park's gazettement should act as a model and an inspiration for marine conservation in the Coral Triangle and worldwide".

The park heralds a new approach to nature management in places like Sabah. It will allow for sustainable uses, especially ensuring local communities living in the protected area can continue their activities within designated zones. This is critical as the area's productive fishing grounds support more than 80,000 people in coastal and island communities, generating around 100 tonnes of fish catch each day.

"WWF is extremely excited by the declaration of Tun Mustapha Park. We congratulate the Sabah State Government, the Sabah Ministry of Tourism, Culture and Environment, and Sabah Parks for taking the bold steps required toward the gazettement of the park, thus forging the way for innovative marine protected area management in Sabah and Malaysia," added Sharma.

WWF-Malaysia will continue to work with the Sabah State Government in the coming years to operationalize the park. WWF will provide technical support to Sabah Parks and collaborate with other agencies, the private sector, local communities and other non-governmental organisations to implement a solid management plan to ensure the sustainable use of resources.

The Tun Mustapha Park is testament to Malaysia's commitment to the Coral Triangle Initiative and its contribution toward increasing the global percentage of marine protected areas. Recognizing its global significance in boosting the conservation of this biodiversity hotspot, WWF awarded the Sabah State Government the Leaders for a Living Planet award in April 2015.