Sustainable Production and Use of Natural Rubber

What comes to mind when asked "what products are made out of natural rubber"? Natural rubber is used for products with which we are very familiar in our daily lives including tires for vehicles such as bicycles and automobiles, rubber bands, hoses, gloves and boots, rubber soles of sneakers, as well as for industrial products that we do not directly see in our day-to-day lives. Currently, however, the production of natural rubber in Southeast Asia is one of the factors leading to forest loss. For that reason, WWF Japan began a project as of 2016 for the sustainable production and use of natural rubber.

Rubber is used in many ways in both business and everyday life.
Rubber falls into two broad types: "natural rubber" and "synthetic rubber".

The rubber tree is originally a wild species came from Amazon in South America.

Recently, the species have been afforested and the raw materials of rubber have come to be harvested in tropical regions around the world.

The production of natural rubber is concentrated particularly in Southeast Asian countries, such as Thailand, Indonesia, Malaysia, and Vietnam, and these four countries account for 3/4 of global production.

Thailand and Indonesia are the two largest natural rubber producing countries in the world, and the majority of the rubber consumed in Japan is imported from these two countries.

One of the characteristics of natural rubber production is that the rubber trees are not in large-scale plantations developed and managed by large corporations, but rather, managed by smallholders . 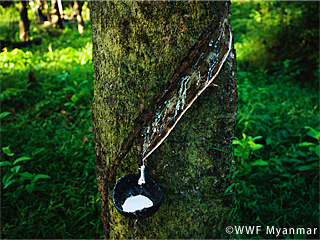 The white sap that oozes out when the surface of a rubber tree is cut with a knife. The collected sap is coagulated, and later processed into natural rubber. 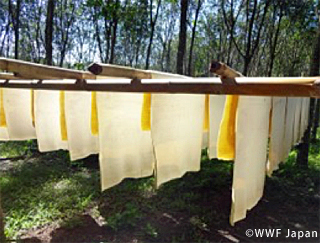 After impurities are removed from the sap, coagulated and rolled into sheets, and then dried. The color of the rubber changes to brown.

Natural rubber cultivation is one of the important sources of income in economically poor regions, especially countries in Southeast Asia.

On the other hand, however, these regions have rich natural forests which are home for endangered large species, such as elephants and tigers. It is also not unusual that new species of wildlife is discovered in these areas.

In particular, due to long-lasting civil war and administration by military regimes, large-scale research have not been conducted in Mekong basin, such as Myanmar, Cambodia, and Laos on the Indochina Peninsula. Therefore, it is considered that undiscovered species are living in these areas.

However, in recent years, such untouched natural forests are decreasing. 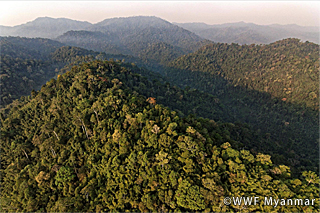 Natural forests near the border between Myanmar and Thailand 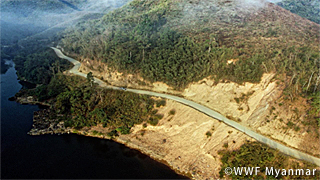 As the development of infrastructure such as roads progresses, more concerns are raised about the impact on the environment.

Development of infrastructure such as roads and dams, the expansion of agricultural land for food, opening plantations for wood products including paper, and palm oil, a type of vegetable oil are the reasons of the forest loss. In addition to these, the expansion of natural rubber is also another factor.

Towards sustainable production and use

Natural resources are indispensable to both our daily lives and business. In many parts of the world, initiatives for the sustainable use of forest related products including wood, pulp and paper, palm oil, etc., have been practiced by using third party certification such as FSC® and RSPO.

NGOs (Non-government organizations) including WWF, are not only calling for conserving the natural environment by preventing further deforestation, but also working to increase "sustainable production" that takes into consideration human rights of local people and labors, and to expand "sustainable market" that encourages to choose sustainable products intentionally.

With regard to natural rubber, in 2015 WWF France and global tire manufacturer, Michelin, and in 2016 WWF Japan and Toyota Motor Corporation began Global Cooperate Partnership and started working together to ensure the origin and sustainability of natural rubber.

Over 70% of the production of natural rubber is used to create tires. 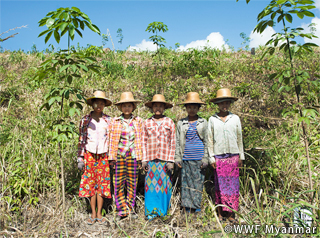 Myanmar, people in a rural village. 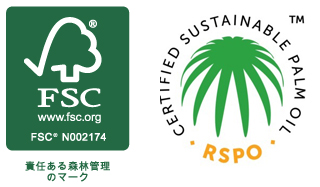 In Japan, there are many companies involved in the supply chain of natural rubber. Therefore, from market perspective, it can be said that we have opportunities to largely contribute to the sustainable use of natural rubber, conservation of the natural environment and sustainable development of producing areas.

Of course, in order to promote these initiatives, we need cooperation and understanding of various stakeholders involved in natural rubber production such as local farmers and communities, producer's association, governments, NGOs, and buyer companies.

At WWF, we work on the sustainable production and procurement of natural rubber by reducing the negative impact on the global environment and conserving biodiversity, and also contributing to sustainable development of areas where seeking economic affluence.