Japan is asking the world's governments to help protect the Ryukyu black-breasted leaf turtle, a rare turtle found on only three small islands in the Okinawa group. 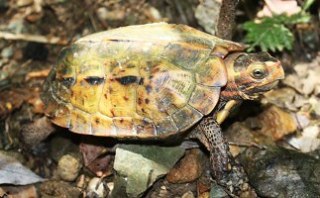 The turtle was proposed by the Japanese Government for listing in Appendix II of CITES, the Convention on International Trade in Endangered Species of Wild Fauna and Flora, following the discovery of it on the international trade scene in mainland China, Hong Kong and online. It is the first time Japan has submitted a proposal to CITES, which is currently meeting in Bangkok, Thailand.

At home, under Japanese law, the Ryukyu black-breasted leaf turtle is designated as a "natural monument" and cannot be captured, transferred or traded without permission from the Commissioner for Cultural Affairs.

But the appearance of the species in the pet trade outside Japan strongly suggests illegal activity is taking place. Governments at CITES chose to accept the Japanese listing proposal, which will see this unique turtle gain better protection against illegal international trade.

The proposal arose after TRAFFIC market surveys raised the alarm following the discovery of small numbers of protected Japanese reptiles in the Asian pet trade. They included 31 Ryukyu black-breasted leaf turtles in two shops in Hong Kong, while two further shops plus one in neighbouring Guangzhou, southern China, told TRAFFIC that they received orders for the species.

TRAFFIC has released a new report at CITES, Trade in Japanese Endemic Reptiles in China and Recommendations for Species Conservation, recommending that the Japanese government propose the listing of the turtle.

"The proposal to list the Ryukyu black-breasted leaf turtle is a small but significant step for Japan," said Kahoru Kanari, Senior Programme Officer with TRAFFIC and an author of the report. "We hope it signals Japan's intention to place more importance on the conservation of wild species found in international trade."

In total 11 proposals were submitted to CITES for listings of freshwater turtles from around the world.