In the red for the rest of 2013: humanity's demands exceed Earth's carrying capacity

Gland, Switzerland: 20 August is Earth Overshoot Day - when humanity has used as much renewable natural resources as our planet can regenerate in one year. For the rest of 2013, we are "in the red" - effectively "overdrawn" on the balance sheet of nature's goods and services that we require to survive.

Based on Ecological Footprint data - measuring how much nature we have, how much we use, and who uses what - Earth Overshoot Day is an initiative of WWF's partner, the Global Footprint Network, to raise awareness and inspire action around ecological "overspending". 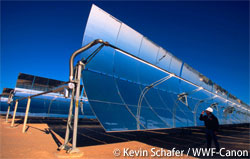 Tapping into renewable energy sources like solar power helps reduce humanity's footprint on our one planet.

Climate change is a major impact of overshoot, as using fossil fuels causes harmful emissions of carbon dioxide that the planet simply cannot absorb. Forests are shrinking, fish stocks are waning, land is getting degraded, freshwater resources are dwindling, and biological diversity is depleting.

"Nature is the basis of our wellbeing and our prosperity - but we are using up way too much of the Earth's finite resources.

"WWF's Living Planet Report shows clearly that humanity's demands exceed our planet's capacity to sustain us - simply put, we are asking for more than we have available," said Jim Leape, Director General of WWF International.

In 1961, the year WWF was established, humanity was using two thirds of the Earth's available natural resources and most countries had ecological reserves - meaning our footprint was lighter and more sustainable.

By taking action now we can reverse the trend.

Switching to clean, renewable, abundant energy sources like sun and wind will slash dirty emissions that strain our oceans and forests, and pollute our air. Choosing sustainable goods like seafood labelled with the Marine Stewardship Council (MSC) blue tick, and wood that is certified by the Forest Stewardship Council (FSC) helps ensure products come from well managed sources.

"More than 50 per cent of humanity's Ecological Footprint is composed of our carbon footprint, especially from the burning of fossil fuels.

"WWF is currently running a global campaign, Seize Your Power, pressing for much greater investment in renewable energies.
"For a clean and healthy future for our children, we must preserve the natural capital that is left - and be much better stewards of the planet we call home," said Leape.