WWF is recommending against purchasing paper from or investing in APP, as  concerns mount over the implementation of the company's February promise to halt deforestation .

WWF was cautiously optimistic that APP's new Forest Conservation Policy is a step in the right direction for the Sinar Mas Group company.  Although it welcomed the recent APP announcement of "an absolute deadline of 31 August 2013 for all natural forest wood felled prior to 1 February 2013 to have reached its pulp mills", WWF believes potential loopholes for continued deforestation remain. 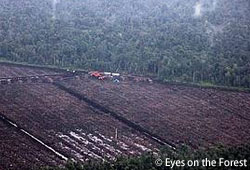 WWF is urging a strengthened commitment, excluding all Mixed Tropical Hardwoods (MTH) from the mills, shutting down potential loopholes allowing continuing deforestation as well as making the monitoring of violations simple.

NGO concerns generally were heightened after Sumatra NGO coalition Eyes on the Forest revealed continuing deforestation of tropical forest and tiger habitat on four metre deep peat by an APP supplier in Riau, Sumatra in May. APP has since described the clearing as "accidental" - an explanation at odds with its initial revelation of the existence of many, previously undisclosed non-moratorium areas where clearing could continue.

More problematic is how tropical forest and tiger habitat came to be classified as "scrub" prior to the clearing.

"The latest incident of forest clearance moratorium violation in Riau warrants our precautionary position questioning APP's achievement of zero deforestation" noted the WWF Advisory to Buyers and Investors of the Sinar Mas Group/Asia Pulp and Paper issued on 1 July.

"APP's "FCP implementation team" categorized a relatively intact forest as "young and old scrub" and allowed a supplier to clear it to supply MTH to APP's pulp mill."

WWF also wrote that it "doubts that APP would have sufficient plantation fiber after 31 August 2013 for all its pulp and paper mills globally, especially with the to-be-built South Sumatra mega mill. Thus we assume that their mills would need to continue relying on MTH, potentially from deforestation".

Given the limited conservation benefits for Sumatra where most of the APP and supplier concessions were cleared prior to the moratorium, WWF has also highlighted the continuing lack of company commitment to forest restoration .

To help APP succeed in becoming a global leader as a deforestation-free company. WWF is seeking a commitment that as of 31 August 2013, "APP will rely exclusively on plantation fiber and not pulp any further mixed tropical hardwood, no matter of what origin, in any of its mills worldwide".

"This would simplify the wood sourcing system, prevent mistakes and streamline verification audits to ensure APP's core commitment to achieve "no deforestation", the advisory says. APP itself admits the challenges "when operating across a huge land area" but switching to full plantation fiber supply restricts the control points to just the pulp mills' gates.

WWF and Eyes on the Forest (a coalition of WWF-Indonesia, Jikalhari and Wahli Riau) are also asking APP to commit to a process with Indonesian NGOs to identify, restore and protect priority ecosystems and areas of high conservation and community values..