WWF-Japan Brings an Ancient, Sustainable - and Stylish - Twist to Fashion

WWF-Japan captured imagination at a design event this month in Tokyo, launching a campaign that raises awareness around conservation issues by re-invigorating a historical Japanese method of dyeing fabric --- giving the ancient technique a timely, stylish twist.


The campaign, entitled "PANDA BLACK -Rewear Project-", brought a smile to everyone who loves their well-worn clothes by introducing a traditional Japanese dyeing technique that can transform faded, stained or worn fabric into jet-black high-fashion. WWF-Japan showcased this method --- originally used to create iconic black kimonos --- with clothes once worn by Japanese celebrities such as Iruka, a female folk singer, and Gugi Akiyama, an art director.


Explained Haruka Onishi, Communications Officer at WWF-Japan, "The concept was inspired by the WWF panda logo, which is recognized worldwide as a symbol of conservation. That is why we call the project ` PANDA BLACK'. Continued Ms. Onishi, "New clothes consume a lot of natural resources and what's worse is that a lot of the clothes thrown out in Japan are still wearable. 'PANDA BLACK' raises awareness around conservation in Japan, a country which has one of the highest rates of discarded clothing in the world, by giving a new lease on life to old, damaged, or stained fabric".


The magic behind the transformation is a kimono-dyeing technique called Kuro Montsuki Zome, which  Kyoto-Montsuki, a dyeing company based in Kyoto, which has been using for over a century.  For people interested on giving their clothes a new lease on life, the Kyoto-Montsuki Company Limited accepts orders from inside and outside Japan to give old clothes a new, stylish shade of black. The company will donate a proportion of the proceeds to WWF-Japan.


Concluded Ms. Onishi, "It is heartening to see an ancient skill, core to Japanese culture, adapting to modern times." She then added with a laugh, "We think this will introduce the colour black to a lot of people's colourful --- but tired --- wardrobes". 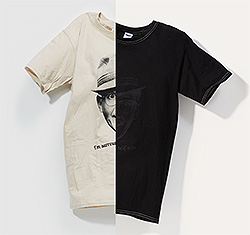 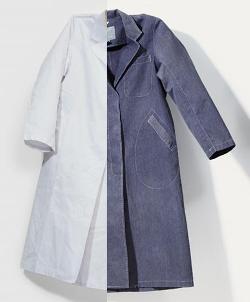