The saola, one of the rarest and most threatened mammals on the planet, has been photographed in Vietnam for the first time in the 21st century. The enigmatic species was caught on film in September by a camera trap set by WWF and the Vietnamese government's Forest Protection Department in the Central Annamite mountains.

"When our team first looked at the photos we couldn't believe our eyes. Saola are the holy grail for South-east Asian conservationists so there was a lot of excitement," said Dr. Van Ngoc Thinh, WWF-Vietnam's Country Director. "This is a breath-taking discovery and renews hope for the recovery of the species."

A cousin of cattle but recalling an antelope in appearance, the Critically Endangered saola, dubbed the Asian Unicorn because it is so rarely seen, is recognized by two parallel horns with sharp ends which can reach 50 centimetres in length. The last confirmed record of a saola in the wild was in 1999 from camera-trap photos taken in the Laos province of Bolikhamxay. In 2010, villagers in Bolikhamxay captured a saola, but the animal subsequently died.

"In Vietnam, the last sighting of a saola in the wild was in 1998," said Dang Dinh Nguyen, Deputy Head of Quang Nam Forest Protection Department and Director of Quang Nam's Saola Nature Reserve. "This is an historic moment in Vietnam's efforts to protect our extraordinary biodiversity, and provides powerful evidence of the effectiveness of conservation efforts in critical saola habitat."

In the area where the saola was photographed, WWF's Preservation of Carbon Sinks and Biodiversity Conservation (CarBi) Programme has implemented an innovative law enforcement model in which Forest Guards are recruited from local communities, and co-managed by WWF and Vietnamese government counterparts, to remove snares and tackle illegal hunting, the greatest threat to the saola's survival.

"Saola are caught in wire snares set by hunters to catch other animals, such as deer and civets, which are largely destined for the lucrative illegal wildlife trade," said Dr. Van Ngoc. "Since 2011, forest guard patrols in the CarBi area have removed more than 30,000 snares from this critical saola habitat and destroyed more than 600 illegal hunters' camps. Confirmation of the presence of the saola in this area is a testament to the dedicated and tireless efforts of these forest guards."

The saola was discovered in 1992 by a joint team from Vietnam's Ministry of Forestry (now called Ministry of Agriculture and Rural Development) and WWF surveying the forests of Vu Quang, near Vietnam's border with Laos. The team found a skull with unusual horns in a hunter's home and knew it was something extraordinary. The find proved to be the first large mammal new to science in more than 50 years and one of the most spectacular species discoveries of the 20th century.

Twenty years on, little is still known about the saola's ecology or behaviour, and the difficulty in detecting the elusive animal has prevented scientists from making a precise population estimate. At best, no more than a few hundred, and maybe only a few tens, survive in the remote, dense forests along the Vietnam-Laos border.

"These are the most important wild animal photographs taken in Asia, and perhaps the world, in at least the past decade," said William Robichaud, Coordinator of the Saola Working Group of the IUCN Species Survival Commission. "They are also inspiring evidence of the effectiveness of the forest guards model to keep saola from sliding into the abyss of extinction. But more support is needed, so that WWF and other partners can scale up the initiative to additional parts of the saola's range in Vietnam and Laos."

The saola is an icon for biodiversity in the Annamite mountains that run along the border of Vietnam and Laos. The area boasts an incredible diversity of rare species, with many found nowhere else in the world. In addition to the discovery of the saola, two species of deer, the large-antlered muntjac and the Truong Son muntjac, were discovered in the Annamite's forests in 1994 and 1997 respectively.

"We are committed to supporting the successful monitoring and law enforcement interventions to ensure the remaining saola, and other threatened species, are given the best possible conditions for recovery," said Carsten Kilian, Senior Project Manager with KfW, the German Development Bank and a funding partner for WWF's CarBi Programme in the Central Annamites. "We hope this remarkable find gives a much needed boost to efforts to save one of the world's rarest and most distinctive large animals."

The saola sighting confirms the species persistence in Vietnam's Central Annamite mountains and will help WWF and partners in the search for other individuals and in targeting the essential protection needed. WWF is also providing alternative livelihood options for communities bordering the Saola Nature Reserves to help reduce poaching and provide much needed income to villagers. This work is a critical complement to law enforcement and protection efforts, and will help wildlife across the Central Annamites recover. 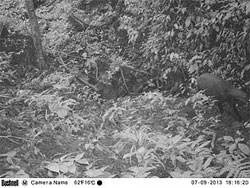 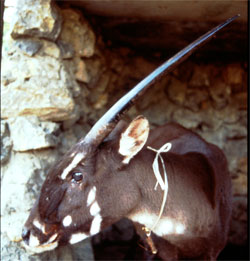 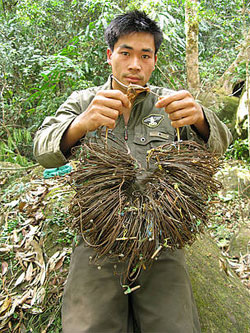