WWF is disappointed that the Western and Central Pacific Fisheries Commission (WCFPC) once again failed to take meaningful action against tuna overfishing and the overall excess of vessel capacity in the region, passing a watered down measure in effect only for 2014 and deferring action for future years.

"It is heartbreaking to observe the various member states acknowledge the dire state in the fishery, but then take few meaningful steps to address the problem because of short term economic interests or other short-sighted reasons," said Bubba Cook, Tuna Programme Manager, WWF´s Smart Fishing Initiative."

After a week-long stalemate among a few members with little progress toward resolution, the Commission approved a new Conservation and Management Measure that remains weak with provisions that offer uncertain reductions of overfishing of bigeye tuna. 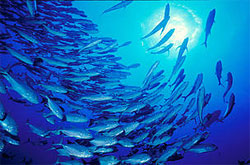 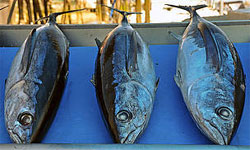 Sylvester Pokajam, Managing Director National Fisheries Authority of Papua New Guinea, said of the meeting, "The Parties to the Nauru Agreement (PNA) and Forum Fisheries Agency (FFA) member countries recognize that the Asian countries are prepared to compromise with us, but the European Union and the United States refuse to compromise on bigeye tuna conservation. At the end of the day we were very disappointed in the decision and the PNA will continue to fight for our original proposal next year."

Overfishing of bigeye tuna is driving the species toward collapse and scientists have identified increasing efficiency of fishing boats related to unmanaged use of Fish Aggregating Devices (FADs) as one of major factors in the decline. Even though the scientific evidence and management tools are available, the political will simply does not appear to exist collectively to implement them and to protect the sustainability of tuna stocks in the region.

"The bigeye tuna stock in the Western and Central Pacific Ocean is just one cog in a complex ecosystem machine. If measures are not taken soon, we could break the machine in a way that impacts far more than just bigeye tuna in the region." said Cook. "We cannot continue to 'kick the can down the road' because as the stock health continues to decrease it will only get harder to make management decisions on those stocks." he added.

The commission implemented measures in 2008 and 2012 that were supposed to reduce overfishing of bigeye tuna by placing limits on the use of FADs. Unfortunately, these measures were inadequate and overfishing not only did not stop, but continued to increase.

Even for South Pacific albacore tuna, where there is a strong will by many of the small island states to address the continuing stock decline, there was no consensus on how to limit the excessive number of vessels fishing in the albacore longline fishery.

Mr. Inoke Wainiqolo, Permanent Secretary for Fisheries and Forests for Fiji stated, "We have been raising concerns about this fishery for several years now but the issue has not received the elevation in the Commission process that it deserves. Our domestic fleets cannot compete with the heavily subsidised Chinese fleets and we have concerns that the catch rates of South Pacific albacore tuna will decrease to a point where our domestic fleets will cease to exist."

The WCFPC makes decisions based on consensus. It only takes one country to prevent a measure from moving forward. This means that delegates of the Commission often must engage in serious compromise and negotiation to accommodate the most obstinate delegates' demands. If the stalemate that occurred at this meeting continues, the WCPFC might want to consider changing how it operates.