A female elephant calf has been born to the elephant Flying Squad in Indonesia's Tesso Nilo National Park. 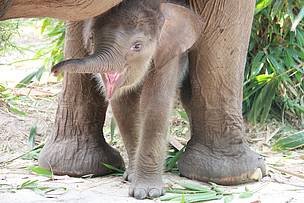 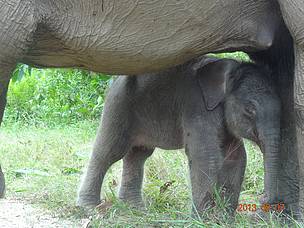 The calf's mother is part of an elite team of critically endangered Sumatran elephants that help protect communities from conflict with wild elephants. Four births have been recorded since the squad was established by WWF and the Indonesia Ministry of Forests in 2004.

This Flying Squad consists of four trained adult elephants and eight elephant handlers called mahouts, which are deployed to drive wild elephants back into the forest when they stray into nearby villages or farms. As elephant habitat shrinks, the animals become more likely to raid crops for food.

Human-elephant conflict is a threat to the safety of both the people living around the national park and the wild elephants that call it home. So far this year, three elephants have been found dead in Tesso Nilo, and 12 were killed last year. Most were believed to be poisoned.

"The Flying Squad is a highly successful model for reducing conflict between people and elephants in a way that is safe for everyone," said Christy Williams, WWF's Asian rhino and elephant programme manager.

"Human-elephant conflict is a problem in many elephant habitats across Asia and in Africa. We are hoping that with greater resources we can establish even more squads in order to prevent elephant and human deaths that don't need to happen. People and elephants can live in harmony," Williams added.

Recently, a Flying Squad in Assam, India, safely drove wild elephants from a tea plantation. Images of the encounter show a large elephant herd first deep in the crop field, then heading back into the forest after being confronted by the squad.

The Tesso Nilo calf's mother is 35 years old and was pregnant for 20-22 months before giving birth to the 90 kilo baby on August 9, just days before World Elephant Day.