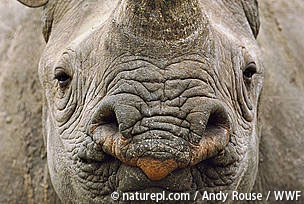 WWF-Singapore and TRAFFIC in Southeast Asia applaud the vigilant work of Singapore Customs in seizing more than $1.5 million worth of smuggled black rhinoceros horn from a man's checked baggage at Changi Airport on Thursday.

"While it is heartbreaking to learn of such a large amount of poached black rhino horn, the vigilance shown by Singapore's customs officials is extremely encouraging as WWF and TRAFFIC continue their global missions to stop poaching, increase rhino populations, improve law enforcement, and tackle the illegal trade of endangered species," said Elaine Tan, CEO of WWF-Singapore.

Reports indicate that the eight pieces of black rhino horn, with a combined weight of almost 22kg, were discovered while the passenger accused of carrying the cache was in transit back to his native Vietnam. New research conducted by both WWF and TRAFFIC has identified that rhino horn consumption is on the rise in Asia.

Singapore is a critical centre of both regional and global transport and trade, and this has been exploited by a variety of individuals and criminal organisations engaged in the illegal trafficking of endangered species. Singapore is a significant hub for smuggling illegal wildlife. In 2002, the world's largest seizure of illegal ivory occurred in Singapore, when more than six tonnes of raw tusks and cut ivory pieces were intercepted.

Black Rhinos are Critically Endangered. Already, the Western Black Rhino subspecies is extinct, and all remaining populations are precariously close to the same fate.

"All five of the world's rhino species are in crisis" said Dr Chris R. Shepherd, Regional Director of TRAFFIC in Southeast Asia. "More than 1000 Rhinos were poached in South Africa in 2013 alone."

"It is absolutely essential that steps are taken immediately to reduce demand for rhino horn in Asia."

Governments need to recognize the urgency and importance of ending the illegal trade in rhino horns, and to ensure enforcement efforts greatly increased.

WWF and TRAFFIC have previously taken part in a joint global campaign calling for governments around the world to strengthen legislation and law enforcement efforts working against illegal wildlife trade, and for consumers to play their critical part in reducing the demand for illegal wildlife products, like black rhino horn.

Rhino horn is a highly prized component of traditional Asian medicine, it is most commonly used after being ground into a fine powder, or manufactured into tablet form, after which it is believed to treat a variety of illnesses. In Vietnam however, recent TRAFFIC research has identified that it is frequently used as a status symbol.

"The continuing increase in rhinoceros poaching is directly linked to increased demand for rhinoceros horn in Asia, where recent consumer research conducted by TRAFFIC has shown the main driver of consumption is perceived prestige and status," said Dr Shepherd.

"Poaching and the illegal trade in endangered species have a devastating impact on our natural environment, which in turn directly affects all of us in a negative way. Singaporeans can play a crucial role in stamping out the trade of illegal wildlife by spreading the word that buying products made from endangered species is wrong. Increasing community awareness is the first step toward positive change," said Elaine Tan.

Just last week the South African government revealed that a record 1004 rhinos were killed by poachers during 2013 across the country, the equivalent of nearly three animals a day. World famous safari destination Kruger National Park continues to be the hardest hit with 606 rhino deaths.