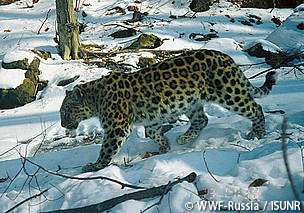 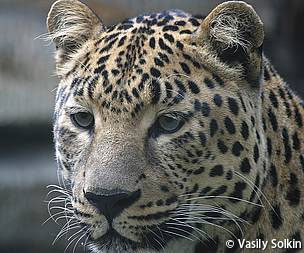 Video footage released today of one of the most endangered species on the planet, the Amur leopard, provides vital information to help conservation efforts.

Camera trap footage from eastern Russia filmed in November and December of 2013 and made available this month, reveals how the highly endangered Amur leopard raises kittens in the wild as well as giving an insight into family behavior.

In November 2013, Land of the Leopard National Park and WWF started a joint project, "Leopard's Reality Show", installing 10 hidden camera traps near the remains of a sika deer.

The 78 hours of unique video material shows how the female Amur leopard, named Kedrovka, feeds her kittens with the sika deer, trains them, and resolves their disputes. She has three kittens, a rare occurrence for leopards. We see how kittens play and fight for meat, discover the world by studying birds, weasels, and mice, and experience first fears and pain.

"In the video we can see how the mother urges the weakest kitten to eat after the other two have abandoned the prey. But it is not as fussy as most human mothers, when the weakest kitten starts to limp on one paw and whines about it, the mother just ignores it", said Vasily Solkin from WWF-Russia Amur branch, who compiled the footage.

Previously scientists believed that similar to a lion pride, leopards from one "family" ate prey together. However this footage shows that leopard kittens approach the deer in turns, with the strongest eating first and the weakest last.

This means that any leopard "meal" takes a long time, and the last kitten always has the smallest chance of being fed because a strange noise or other threat may force the leopards to move on and leave the kill.

This fact explains why female leopards sometimes choose to give attention only to two kittens, even if they give birth to three. Very often, the third or even the second kitten does not survive in the long term.

All information gathered about leopard upbringing is crucial for WWF conservation efforts. With few leopards left, they may be genetically too close and inbreeding may weaken their chances of survival.

There are plans in the science community to introduce new leopards into the wild by breeding leopards from zoos but to ensure that the program is successful, it is important to know how leopards are raised and taught hunting skills in the wild.

Amur leopards live in the northernmost part of the species range in far-eastern Russia. A Census in 2013 showed that there are 48 to 50 Amur leopards remaining in the wild, about 80 per cent of the species' former range disappeared between 1970 and 1983.

Habitat destruction by unsustainable logging, forest fires and land conversion for farming infrastructure development are the main causes, while the species has also been hit hard by ungulate poaching. Ungulates are large, hoofed mammals and the main prey for Amur leopards.

Numbers are increasing from a few years ago when just 30 remained and WWF plans to keep this upward trend with extensive conservation measures. Every leopard has a unique pattern of spots, so experts can recognize almost every one of the remaining leopard by photo or video images.