Endangered leopard images are proof of conservation progress in Caucasus

Camera trap images taken over the last eight months in Southern Armenia and the Nakhchyvan Autonomy region of Azerbaijan show that at least one male and two females have been living in the area for the last year with hopes the females will deliver cubs.

Images of more Caucasian leopards from Azerbaijan this month have given conservationists indications that up to seven individuals are living in the Southern Caucuses region.

"Such increasing evidence can be interpreted as positive trends in the leopard population particularly in the southern part of the Caucasus, which must be closely connected with our 10 years of leopard conservation activities here", said Nugzar Zazanshvili, Conservation Director at WWF-Caucasus. 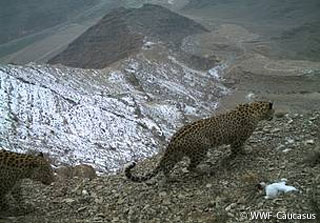 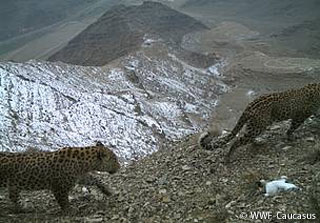 According to the camera trapped photos and field monitoring data the number of prey species for the leopard has also significantly increased.

WWF together with the IUCN/SCC Cat Specialist Group developed a Regional Strategy on Leopard Conservation with involvement from various organizations of the Caucasus Ecoregion.

The strategy was adopted by the governments of Armenia, Azerbaijan and Georgia as part of National Action Plans.

It included elements such as increased monitoring of the species, combating poaching and increasing the number of protected areas.

Since 2002 four new protected areas were established in southern Armenia, which include leopard habitats, and cover 2.9% of the country.

Caucasian leopard numbers are estimated to be fewer than 1300 individuals, and range from Iran to the North Caucasus region in Russia.

Also known as the Persian leopard, its population was once widespread throughout the mountainous region between the Black and Caspian Seas, but declined drastically throughout the 20th century due to poaching and habitat loss.