Earth Hour set new records for participation across the globe in 2014, proving that the symbolic hour continues to gain strength and momentum in its eighth year.

Details continue to come in from events that spanned every continent, but it is already clear that millions of people were touched by this unifying movement. Already 162 countries have confirmed participation at Earth Hour events, with over 7,000 cities registering Earth Hour activities.

"It is always extraordinary to see cities and landmarks involved in Earth Hour, but in 2014 it's the stories and activities happening beyond the hour that show this event has evolved into a movement driven by the power of the crowd," said Andy Ridley, CEO and co-founder of Earth Hour.

"To have witnessed Earth Hour from Singapore, the home of this WWF-organized event, made a powerful impression on me," said WWF Director General-designate, Dr. Marco Lambertini. "To see people united in a single purpose of making our lifestyles less impactful on the planet inspired me immensely. Earth Hour sent people around the world a message that each of us has the power to make a difference."

The reach of Earth Hour deepens as the world grows increasingly connected. While the event regularly trends on social media, this year saw the launch of Earth Hour Blue. The new crowdfunding platform empowers people to use their voice, or their dollar, to support projects of their choice across the globe.

There were many highlights to Earth Hour events held across the globe:

- Celebrations began across the islands of New Zealand;

- The event's profile in Fiji was raised by a fundraising dinner hosted by President Ratu Epeli Nailatikau;

- In Australia, the focus was on the challenges facing the Great Barrier Reef. Earth Hour was an opportunity to showcase the new documentary "Lights Out for the Reef";

- In Singapore, the global headquarters and home of Earth Hour, Spider-Man and the stars of "The Amazing Spider-Man 2" - Andrew Garfield, Emma Stone and Jamie Foxx - joined the crowd to remind each of us that we all have the power to make a difference;

- In China, attention was drawn to the need for "Blue Skies" and the importance of reducing air pollution and smog;

- As Earth Hour moved across the globe, lights were switched off at iconic locations such as the Bahá'í Lotus Temple in New Delhi and the Gateway of India in Mumbai. Events in India took on special significance as they marked the start of a project to educate children on the value of efficient energy while reducing the carbon footprints of 15,000 schools across the country;

- Across the UAE, participants marked the importance of switching to efficient lighting as the world's tallest building --- the Burj Khalifa --- and the Sheikh Zayed Grand Mosque went dark;

- At the Khaju Bridge in Isfahan, Iran, the event helped bring attention to the issues facing the historic Zayanderud River;

- In Russia, the green light was given for the Kremlin and Red Square to turn off their lights. Russian cosmonaut Mikhail Tyurin recorded a message from the International Space Station, reminding the world that while the planet looks amazing and beautiful from space, it also looks fragile;

- In Egypt, the Great Pyramids of Giza and other landmarks went dark;

- Istanbul, Turkey marked an Earth Hour first when the Sultan Ahmed Mosque (the Blue Mosque) switched its lights off for the first time. The Hagia Sophia and the Bosphorus Bridge connecting Europe and Asia also participated;

- The UK enjoyed a live stream event featuring Sophie Ellis-Bextor to the backdrop of lights going off across landmarks such Big Ben, the Tower Bridge, London Eye, Buckingham Palace, the Houses of Parliament and Westminster Abby;

- In Argentina, crowds gathered to celebrate both Earth Hour and the decision taken the day before to submit a Senate bill aimed at replacing existing water heating systems with efficient electric systems in 800,000 homes;

- The Christ the Redeemer statue in Rio de Janeiro switched off as Victor Civita Square in São Paulo marked the official switch-off event in Brazil;

- Across the United States of America, many world-recognized landmarks --- including Times Square, the UN Headquarters, and the Empire State Building in New York --- marked Earth Hour;

- The final places to mark Earth Hour were Tahiti and the Cook Islands, significant as some of the places in the world most vulnerable to rising sea levels.

For more Earth Hour 2014 images from around the world visit: http://www.flickr.com/photos/earthhour_global 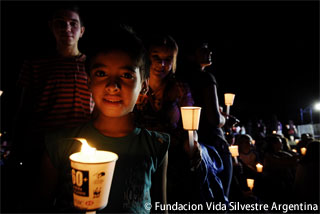 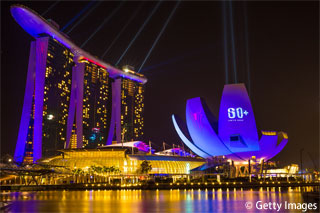 Singapore the home of Earth Hour and Spider-Man in 2014 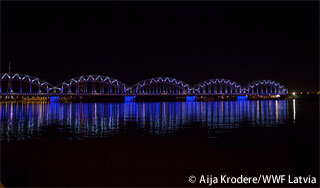 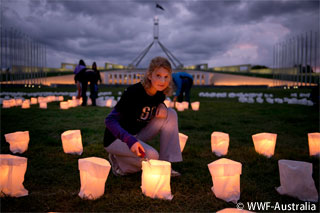 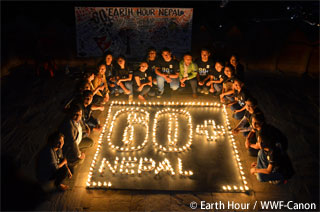 WWF-Nepal kickstarted their target of reaching 500,000 people in the country to lead environmental change through The Generation Green Campaign at Earth Hour 2014.

Lights out in Dubai for Earth Hour 2014. 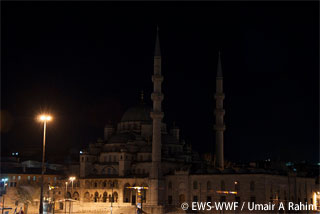 The Sultan Ahmed Mosque in Istanbul after the lights went out for Earth Hour 2014. 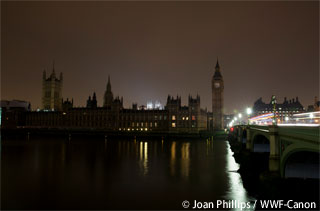 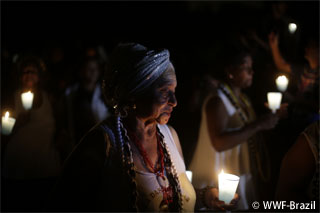 A woman holds a candle at Earth Hour 2014 celebrations in Sao Paolo, Brazil