Yokohama, Japan - A UN climate impact report, released today, gives the clearest and most comprehensive evidence yet that the earth we call home is in deep trouble. It reinforces the sobering view that climate change is real, it's happening now and it's affecting the lives and the livelihoods of people as well as the sensitive ecosystems that sustain life.

This is the second in a series of four reports being prepared by the world's leading climate authorities in the Intergovernmental Panel on Climate Change (IPCC). It assesses the impacts, adaptation and vulnerability of human and natural systems, the observed impacts and future risks of climate change, and the potential for and limits to adaptation. 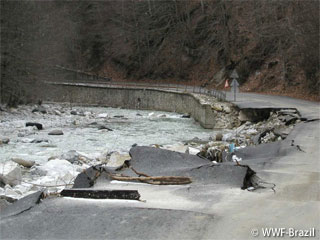 Samantha Smith, leader of the WWF Global Climate & Energy Initiative says the report highlights, for the first time, the dramatic difference of impacts between a world where we act now to cut emissions, which now come mostly from using fossil fuels; and a world where we fail to act quickly and at scale.

"This report tells us that we have two clear choices: cut emissions now and invest in adaption - and have a world that has challenging and just barely manageable risks; or do nothing and face a world of devastating and unmanageable risks and impacts."

"The report makes it clear that we still have time to act. We can limit climate instability and adapt to some of the changes we see now. But without immediate and specific action, we are in danger of going far beyond the limits of adaptation. With this risk posed so clearly, we have to hope that the next IPCC report which is being released in Berlin in April, will provide us with strong statements on the solutions that we know exist," she says.

Despite the warnings given by the IPCC in its reports over the past 20 years - reinforced by the release of the report today - the gap between the science and what governments are doing remains huge, says Sandeep Chamling Rai, head of the WWF delegation to the meeting.

"The science is clear and the debate is over. Climate change is happening and humans are the major cause of emissions, driven mainly by our dependence on fossil fuels. This is driving global warming. This report sets out the impacts we already see, the risks we face in the future, and the opportunities to act. It has been accepted by the member governments of the IPCC. Now it is up to people to hold their governments to account, to get them to act purposefully and immediately," he says.

The risks of collective inaction are greatest for developing countries, says Chamling Rai. "All countries are vulnerable but developing countries have a greater sensitivity, with more people living in poverty and fewer resources to respond to climate disasters. We need to put in place those measures that will slow down warming and put us on a fair and just transition to a sustainable world. The report shows that ambitious emissions cuts now can reduce the risk of climate change in the second half of this century."

And the regional assessments - given in depth in this report - show with a great degree of certainty what the impacts will be in the key regions of the world.

"We now have a better understanding of how climate impacts will affect people and nature in different regions. International adaptation efforts need to be intensified to adequately respond to such varied impacts," says Chamling Rai.