Global wildlife populations have declined by more than half in just 40 years as measured in WWF's Living Planet Report 2014. Wildlife's continued decline highlights the need for sustainable solutions to heal the planet, according to the report released today.

The Living Planet Report 2014 also shows Ecological Footprint - a measure of humanity's demands on nature - continuing its upward climb. Taken together, biodiversity loss and unsustainable footprint threaten natural systems and human well-being, but can also point us toward actions to reverse current trends.

"Biodiversity is a crucial part of the systems that sustain life on Earth - and the barometer of what we are doing to this planet, our only home. We urgently need bold global action in all sectors of society to build a more sustainable future," said WWF International Director General Marco Lambertini. 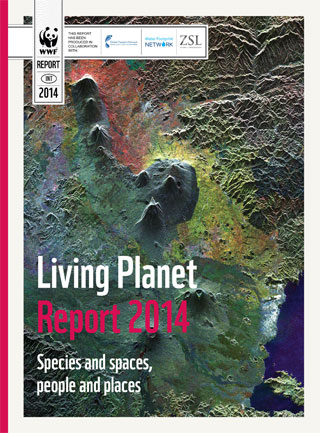 This is the tenth edition of WWF's Living Planet Report

The Living Planet Report 2014 is the tenth edition of WWF's biennial flagship publication. With the theme Species and Spaces, People and Places, the report tracks over 10,000 vertebrate species populations from 1970 to 2010 through the Living Planet Index - a database maintained by the Zoological Society of London. The report's measure of humanity's Ecological Footprint is provided by the Global Footprint Network. 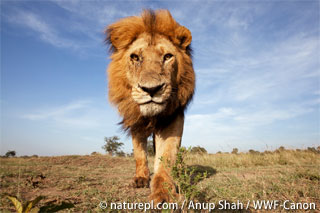 This year's Living Planet Index features updated methodology that more accurately tracks global biodiversity and provides a clearer picture of the health of our natural environment. While the findings reveal that the state of the world's species is worse than in previous reports, the results also put finer focus on available solutions.

"The findings of this year's Living Planet Report make it clearer than ever that there is no room for complacency. It is essential that we seize the opportunity - while we still can - to develop sustainably and create a future where people can live and prosper in harmony with nature," said Lambertini. 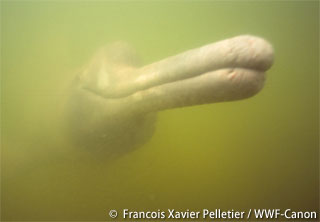 Amazon river dolphin, Brazil.Freshwater species have suffered a 76 per cent decline, an average loss almost double that of land and marine species.

According to the report, populations of fish, birds, mammals, amphibians and reptiles have declined by 52 per cent since 1970. Freshwater species have suffered a 76 per cent decline, an average loss almost double that of land and marine species. The majority of these losses are coming from tropical regions with Latin America enduring the most dramatic drop.

The report shows that the biggest recorded threat to biodiversity comes from the combined impacts of habitat loss and degradation. Fishing and hunting are also significant threats. Climate change is becoming increasingly worrisome, with research cited in the report finding that climate change is already responsible for the possible extinction of species.

"The scale of biodiversity loss and damage to the very ecosystems that are essential to our existence is alarming," said Ken Norris, Director of Science at the Zoological Society of London. "This damage is not inevitable but a consequence of the way we choose to live. Although the report shows the situation is critical, there is still hope. Protecting nature needs focused conservation action, political will and support from industry."

While biodiversity loss around the world is at critical levels, the Living Planet Report 2014 highlights how effectively managed protected areas can support wildlife. In one example, Nepal is noted for increasing its tiger population in recent years. Overall, populations in land-based protected areas suffer less than half the rate of decline of those in unprotected areas.

According to the report, humanity's demand on the planet is more than 50 per cent larger than what nature can renew. It would take 1.5 Earths to produce the resources necessary to support our current Ecological Footprint. This global overshoot means, for example, that we are cutting timber more quickly than trees regrow, pumping freshwater faster than groundwater restocks, and releasing CO2 faster than nature can sequester it.

"Ecological overshoot is the defining challenge of the 21st century," said Mathis Wackernagel, President and Co-founder of Global Footprint Network. "Nearly three-quarters of the world's population lives in countries struggling with both ecological deficits and low incomes. Resource restraints demand that we focus on how to improve human welfare by a means other than sheer growth."

Delinking the relationship between footprint and development is a key global priority indicated in the report. While per capita Ecological Footprint of high-income countries is five times that of low-income countries, research demonstrates that it is possible to increase living standards while restraining resource use.

The report comes months after a United Nations study warned of the growing impacts of climate change and gives evidence to the finding that climate is already impacting the health of the planet.

According to the Living Planet Report 2014, more than 200 river basins, home to over 2.5 billion people, experience severe water scarcity for at least one month every year. With close to one billion people already suffering from hunger, the report shows how climate, combined with changing land uses, threatens biodiversity and could lead to further food shortages.

Constructive negotiations over an international climate deal are among the opportunities that exist to control these trends. Completion of a global agreement that clears the way to a low carbon economy is essential given that fossil fuel use is currently the dominant factor in Ecological Footprint.

A complementary set of negotiations on a set of development goals creates the opportunity for countries to address how natural systems can be protected as world population surpasses 9.5 billion in coming decades.

The Living Planet Report 2014 serves as a platform for global dialogue, decision-making and action for governments, businesses and civil society at a critical time for the planet.

The report provides WWF's "One Planet Perspective" with strategies to preserve, produce and consume more wisely. It also includes examples of how communities are already making better choices to reduce footprint and biodiversity loss.

"Nature is both a lifeline for survival and a springboard to prosperity. Importantly, we are all in this together. We all need food, fresh water and clean air - wherever in the world we live. At a time when so many people still live in poverty, it is essential to work together to create solutions that work for everyone," said Lambertini.

In Asia, the report shows how cities are innovating ways to reduce carbon emissions, integrate renewable energy and promote sustainable consumption. In Africa, the report profiles how government can work with industry to protect natural areas. In other examples from around the world, the report highlights initiatives to control pollution, transform markets and improve lives.

WWF's "One Planet Perspective" shows how every corner of the globe can contribute to maintaining a footprint that doesn't outpace Earth's ability to renew. By following WWF's programme for one planet living, society can begin reversing the trends indicated in the Living Planet Report 2014.