The decision, taken yesterday at a reconvened special meeting of the Inter American Tropical Tuna Commission (IATTC), raises expectations that many of the same nations will also heed advice to dramatically cut Bluefin Tuna catch quotas elsewhere in the Pacific at a crucial meeting in December. 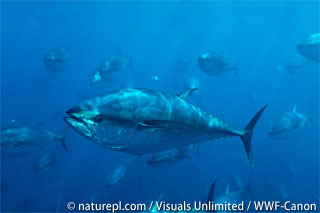 WWF has applauded the IATTC decision to establish a catch quota of 6600 tons of Pacific Bluefin tuna for commercial catches spread over the next two years 2015/2016 (approximately 3300 tons for each year or a 45 per cent reduction, compared to International Scientific Committee advice for a 50 per cent reduction to 2750 tons). The IATTC also agreed that no country can exceed 3500 tons of catches in 2015 and that the fishing nations have to establish a catch documentation system.

"We are pleased that the important fishing nations Mexico, Japan and the United States made ​​an effort to follow the scientific advice of the Commission regarding the reduction of catch quota", said Pablo Guerrero, Eastern Pacific Ocean Tuna Coordinator for WWF's Smart Fishing Initiative. "This decision is vital to the survival of the Pacific Bluefin Tuna, as is evidenced by the current catch being 90 per cent composed of young juveniles yet to breed and the breeding stock estimated to be down to just four per cent of original levels. "But little will be saved if countries do not also agree to similar cuts to Pacific Bluefin Tuna catches when the Western and Central Pacific Fisheries Commission (WCPFC) meets in Samoa in December."