Apia, Samoa: The 38 member Western and Central Pacific Fisheries Commission (WCPFC) has once again taken minimal action to sustain the collapsing fish stocks in its care, with only the virtually collapsed Pacific Bluefin Tuna benefitting from management measures in line with scientific recommendations. 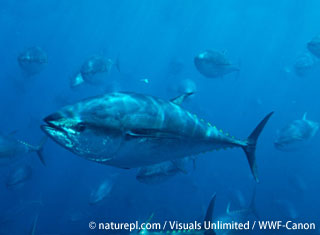 "It's great that the Commission adopted measures for the conservation of the Pacific Bluefin tuna based on the scientific recommendation, but it shouldn't have required the near collapse of the stock before they took action", said Bubba Cook, WWF´s Western Central Pacific Tuna Programme Manager.

"All of the ecologically important and economically lucrative tuna fisheries in the Western and Central Pacific are in decline."

While catches of Pacific Bluefin tuna have been pegged to half those of 2002-2004 levels for juveniles under 30 kg and held to 2002-2004 levels for larger fish, the commission was unable to agree a long-term recovery plan. WWF believes the target for a 10-year plan should be to return stocks to 20 percent of previous levels.

Meanwhile, there was no change to clearly inadequate management measures for bigeye tuna, heavily over-exploited and now down to only 16 percent of historic populations.

"By ignoring the need for meaningful action on bigeye tuna, the Commission appears to have simply abdicated its responsibility to conserve and manage tuna in the region." said Cook.

Many industry representatives were not satisfied with the outcome of the meeting: "Disappointment' is an understatement. I feel that the WCPFC is failing as a process", said Tima Tupou of the Pacific Islands Tuna Industry Association (PITIA).

At this year's meeting, the Pacific Island nations also took a serious blow when some Commission members rejected a proposal to secure the future of the South Pacific albacore tuna stock.

Hundreds of subsidised vessels from Asia are devastating the albacore stock, which is driving the biological health of the stock down while undermining the economies of many of the Pacific Islands that are heavily dependent on the albacore fishery as well.

"Every year the Pacific Island nations engage in difficult negotiations in good faith and try to achieve agreement so that we can protect the resource that sustains our island communities." said Marshall Islands Marine Resources Authority Director Glen Joseph. "Unfortunately, people agree verbally to what Pacific Island nations are asking, but in the end seem to vote against them."

Even very simple proposals such as one introduced by the Parties to the Nauru Agreement (PNA) 3 to implement a conservative Target Reference Point in the skipjack tuna fishery, constituting one of the most basic and fundamental management measures for fisheries management, failed to reach agreement. "It doesn't inspire much confidence in the process when even relatively simple, sensible decisions become a struggle." said Cook.

Notes: The annual meeting of the Western and Central Pacific Fisheries Commission (WCPFC) was held in Apia, Samoa, from December 1-5.