Despite increased efforts to tackle the surge in rhino poaching, a record 1215 rhinos were killed in South Africa in 2014 - highlighting the need for urgent international action to address the crisis ahead of a critical global meeting on illegal wildlife trade in Botswana in March.

Figures released today by the South African government show that over 100 rhinos were illegally killed on average each month in 2014 - representing a 21% increase over the 1004 animals poached in 2013. 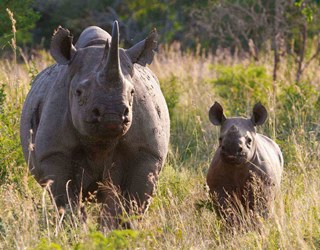 "Killing on this scale shows how rhino poaching is being increasingly driven by organised criminal syndicates. The country's brave rangers are doing all they can on the ground to protect rhinos but only a concerted global effort can stop this illegal trade. This includes South Africa scaling up its efforts to stop wildlife trafficking and Viet Nam taking urgent measures to stop illegal use of wildlife products including rhino horn," said Elisabeth McLellan, WWF Head, Wildlife Crime Initiative. 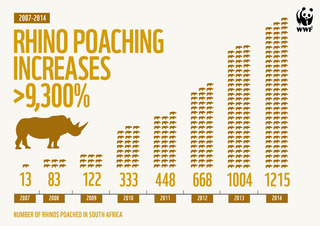 The graph above illustrates the increase in rhino poaching in South Africa over the last eight years. © WWF-UK

Kruger National Park, which boasts the majority of the country's rhinos, remains the poaching epicentre with 827 rhinos killed for their horns during the year - nearly two-thirds of the total. Currently, South Africa is home to approximately 20,000 rhinos - more than 80% of the global population.

"While there is a growing global momentum to tackle wildlife crime, these record rhino poaching numbers underline just how urgently much more needs to be done. In 2015, we need to keep working together on the strategic interventions which will have the greatest impact and result in the greatest benefits for our rhinos," said Dr Jo Shaw, Rhino Programme Manager for WWF-South Africa.

The South African authorities also announced that there were 386 rhino-related crime arrests in 2014, thanks largely to the dedication and commitment of the country's rangers. But enhanced law enforcement alone is not enough.

"All eyes will now be on the next major conference on the illegal wildlife trade to be held in Botswana in March, where governments from around the world will take further steps to fight the trade and save the rhino - and other critical species - from international traffickers," McLellan added.