A Rainforest Alliance audit released today confirmed the findings by WWF and local NGOs that APP is failing to stop deforestation and illegal activities in its concessions by other parties, even in areas already identified by the company as containing high conservation values and carbon stocks. 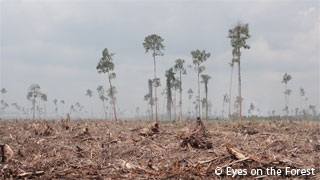 "APP has halted its own forest clearing and embarked on a wide array of assessments in its concessions," said Aditya Bayunanda, Forest Commodity Leader WWF-Indonesia. "But not much has changed on the ground - forests continue to disappear, peat soils continue to be drained and social conflicts remain unresolved. The company has even failed to protect forests they are legally required to conserve."

"No concrete plans on where forests will be restored or conserved, and with what financing"

Progress is lacking on action to reduce the climate impacts of APP's vast concessions on peat. The Rainforest Alliance audit confirmed that other than stopping new canal development APP has taken no action to reduce greenhouse gas emissions resulting from the draining of over a million hectares of peatland under company control.

WWF is also very concerned with the lack of progress by the company to resolve hundreds of social conflicts. The findings of local NGOs were confirmed in the Rainforest Alliance audit and should send high alerts through APP headquarters.

"WWF has participated in numerous stakeholder meetings and task force activities since the announcement," said Bayunanda. "These discussions have resulted in very little progress. There are no concrete plans on where forests will be restored or conserved, and with what financing. Even in APP's priority landscape, Bukit Tigapuluh, the company has yet to take promised steps to provide wildlife corridors and stop illegal loggers, poachers and encroachers from accessing the forest through its logging road."

WWF commends APP for having invited Rainforest Alliance to audit its progress, and urges APP to act quickly and decisively to address the audit findings. WWF will also carefully study the audit findings and advise APP customers accordingly.

"After two years of assessments and planning, APP needs to shift its focus to action. Today, APP promised change and WWF will monitor its next steps to see how serious it is about saving forests," said Rod Taylor, Director, Forest Programme at WWF International. "APP customers should be alert to the risk of doing business with a company that has not yet eliminated deforestation and peat carbon emissions from its wood supply areas."