Primorye, Russia -At least 57 Amur leopards now exist in Russia's Land of the Leopard National Park, up from just 30 cats counted in 2007, according to new census data announced last week. An additional 8-12 leopards were counted in adjacent areas of China, meaning the number of Amur leopards, a rare subspecies considered the world's rarest wild cat, has more than doubled over the past seven years.

The census, taken with camera traps spread out over more than 900,000 acres of primary leopard habitat, collected around ten thousand photographs that scientists used to identify nearly 60 individual animals. Individuals are determined by distinctive patterns of spots found on leopard fur. The census was carried out by the Land of the Leopard National Park jointly with the Far Eastern Branch of the Russian Academy of Sciences with the support of The Amur Leopard Center and WWF-Russia. 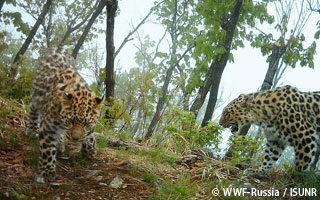 The census, taken with camera traps spread out over more than 900,000 acres of primary leopard habitat, collected around ten thousand photographs that scientists used to identify nearly 60 individual animals.

"Despite still being on the brink of extinction, the Amur leopard is showing encouraging signs of gradual recovery, demonstrating that dedicated conservation efforts do pay off. The collaboration between Russia and China to protect vast areas of suitable leopard habitat is the next key step to protect this species," said Carlos Drews, director of WWF´s global species programme.

According to Yury Darman, head of WWF Russia Amur Branch and a member of the Supervisory Board of The Amur Leopards Center, "The national park became the main organizational force for leopard protection and research."

Conservationists are working toward monitoring leopard populations across the border in neighboring Chinese nature reserves. One of the highly anticipated next steps would be the establishment of a Sino-Russian transboundary nature reserve.