Gland, Switzerland -- Arctic sea ice shrank to the lowest winter extent ever recorded, according to data released today by the US-based National Snow and Ice Data Center. The record-low ice level follows earlier news that 2014 was the warmest year since record keeping began.

An unusually warm February in parts of Alaska and Russia contributed to the record ice low. The winter reach of Arctic ice decreased 1.1 million square kilometres compared to the average maximum from 1981 to 2010. This represents an area more than twice the size of Sweden.

"This is not a record to be proud of. Low sea ice can create a series of reactions that further threaten the Arctic and the rest of the globe," said Alexander Shestakov, Director, WWF Global Arctic Programme.

"Today's chilling news from the Arctic should be a wakeup call for all of us," said Samantha Smith, Leader, WWF Global Climate and Energy Initiative. "Climate change won't stop at the Arctic Circle. Unless we make dramatic cuts in polluting gases, we will end up with a climate that is unrecognizable, unpredictable, and damaging for natural systems and people."

WWF and others have identified special places around the Arctic that will be increasingly important in a future with less ice. These regions, like the Last Ice Area, represent the best hope for ice-associated life.

"An enormous web of life depends on Arctic sea ice. With sea ice under increasing threat, Arctic states must quickly create a network of resilient marine areas around the pole," said Shestakov.

The proportion of thick Arctic ice that lasts multiple years has dwindled over the past two decades. A recent study shows that Arctic sea ice has thinned by 65 per cent since 1975, leaving ice that is more susceptible to melting. 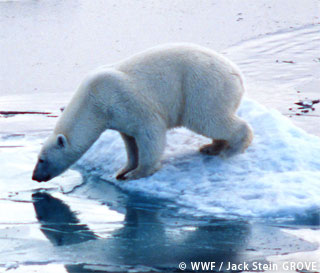 A recent study shows that Arctic sea ice has thinned by 65 per cent since 1975, leaving ice that is more susceptible to melting.