Millions unite to light the way on climate change

SINGAPORE- From Antarctica to the International Space Station, WWF's Earth Hour brought the world closer together on Saturday by mobilising millions to highlight the need for climate action. In a year of record participation, individuals, businesses, city skylines and landmarks in 172 countries and territories switched off their lights to participate in the world's largest grassroots movement for the environment.

Beginning with the first lights out event in Samoa and then moving across seven continents to Tahiti, the past 24 hours inspired unprecedented unity from people around the world committed to use their power to change climate change.

"From Earth's extremes to outer space, people came together to send a clear message that action on climate is on top of their agenda. Earth Hour confirms our belief that in order to change climate change we need to act together. WWF will continue to do its share to shape strong, global climate solutions," said Sudhanshu Sarronwala, Chair, Board of Directors, Earth Hour Global.

Over 1,400 landmarks switched off the lights this Saturday including the Empire State Building and the United Nations Headquarters in New York, the Eiffel Tower in Paris, the Burj Khalifa in Dubai, the Sydney Harbour Bridge and Hong Kong's iconic skyline. Close to 40 UNESCO World Heritage sites such as the Acropolis in Athens, the walled city of Baku, the Cologne Cathedral and the Galapagos Islands also participated.

As Moscow's Kremlin switched off the lights, citizens switched on their power for change by collecting close to 70,000 signatures to petition a moratorium on the exploration of Arctic oil.

In Malaysia, citizens attended the first-ever Earth Hour 2015 carnival in Petaling Jaya and answered the call to come out in large numbers to show their support for a city council declaration to reduce carbon emissions by 25 per cent within the next five years.

Across the globe in Colombia, physical resilience met climate resilience as 1,100 people enrolled in a '110KW' marathon along a climate change trail highlighting the need for communities to strengthen their defenses against the worst impacts of climate change.

"Science shows us that climate change is a global concern, Earth Hour shows us that people have the power to take on the climate challenge," added Sarronwala. "Earth Hour turns out the lights, but the future of our planet is brightened by the countless individual actions of supporters around the world."

In a video statement recorded for Earth Hour, UN Secretary-General Ban Ki-moon echoed WWF's belief that people will play a key role in solving climate change and that Earth Hour is a movement of millions offering real solutions.

More than just turning out the lights, the ninth edition of Earth Hour was about people around the world sending a clear message that climate action is a political priority. Supporters in Scotland, Switzerland and Colombia signed digital petitions for stronger climate action. Australia, the UK and Finland hosted sustainable candle-lit dinners to highlight the impact of climate change on agriculture, while participants in India, the Philippines and China promoted access to renewable energy.

"As we come out of the hottest year on record and hear reports of record low Arctic sea ice, this year's Earth Hour reminds us yet again why we all need to be part of the climate conversation. It is our climate and it is our collective impact--as individuals, businesses, governments--that will help make climate change history," said Sarronwala.

Since its origin as a symbolic lights off event in Sydney in 2007, WWF's Earth Hour has grown into the world's largest grassroots movement for the environment igniting public awareness and action on climate in more than 7,000 cities across the world.

Earth Hour 2015 by the numbers:
- record participation by 172 countries and territories;
- lights off at over 1,400 landmarks and close to 40 UNESCO World Heritage sites;
- over 80 climate outcomes driven by WWF teams harnessing the power of Earth Hour;
- social media reach of approximately 384 million (Facebook & Twitter) between 23 and 29 March, including social posts and tweets on Earth Hour from celebrities like footballer Lionel Messi, actress Alicia Silverstone and model Gisele Bundchen;
- 300-plus ambassadors and influencers around the world including WWF Global Ambassadors Jared Leto and Andy Murray supported the campaign either on ground or digitally;
- support from thousands of corporates around the world including Rovio Entertainment, Timex and Zinkia Entertainment, creators of Pocoyo, the Earth Hour Kids Ambassador since 2010.

While the lights may go out on one night, the efforts of Earth Hour and its supporters to change climate change last throughout the year. As we move along the road to Paris and beyond, WWF teams will continue to work with citizens, policymakers and businesses to drive progress on key climate issues like access to renewable energy, climate education and fighting deforestation.

Earth Hour will celebrate our collective impact for the planet with supporters during its ten-year anniversary on 19 March 2016.

Link to videos and photos on Earth Hour events from around the world: http://www.earthhour.org/media-centre 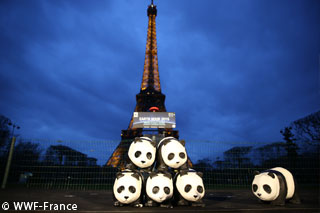 The Eiffel Tower in darkness. This year Paris will host the UNFCCC climate negotiations. 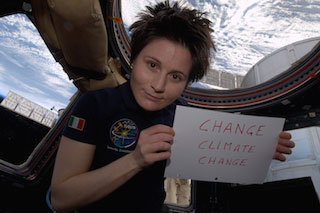 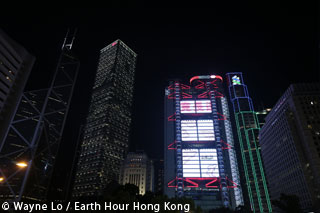 Lights out in downtown Hong Kong. 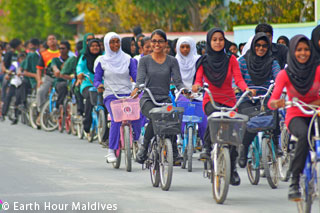 An Earth Hour cycling event at Kulhuduhfushi, the Maldives. 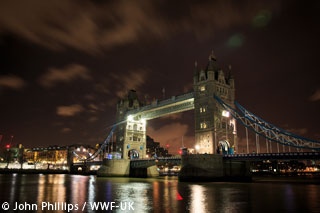 Lights out at London Bridge.