At a solemn ceremony in Bangkok, the Thai Government today destroyed over two tonnes of illegal elephant ivory, highlighting its determination to crack down on wildlife criminals and the illegal ivory trade.

Led by Prime Minister General Prayut Chan-o-cha, the public ceremony involved Buddhist and Brahman faith leaders praying for the elephants that had been slaughtered for their ivory as government representatives, international diplomats and conservationists witnessed entire tusks, carved ivory and trinkets being crushed into small pieces by a hammer mill.

The crushed ivory was then taken to a second site where it was mixed with industrial waste and incinerated to ensure its complete destruction.

"We must tackle this issue efficiently for the progress of Thailand and also for our work to be recognized by the international community," said General Prayut Chan-o-cha, Prime Minister of Thailand at the ceremony. "We must collaborate, co-operate, put into practice the introduced regulations and keep doing our best to protect elephants with strict enforcement actions."

Following global best practice, the ivory stockpile from the Departments of Customs and National Parks, Wildlife and Plant Conservation was independently audited before it was destroyed, with WWF-Thailand and Freeland acting as auditors. Each piece was measured, weighed and matched against official records.

"Thailand's ivory destruction is more than just a symbolic event since it follows a series of important steps that the country has taken to tackle illegal ivory trade in the past year," said WWF's Janpai Ongsiriwittaya, who participated in the audit. "For too long Thailand has been exploited by wildlife criminals as both a gateway and marketplace for ivory poached in Africa and Asia. This event aligns the commitment of the Thai government and the will of the Thai people with the global priority of stopping the illegal ivory trade."

Around 30,000 African elephants are poached every year, their ivory destined for countries like Thailand. For years, the country was world's largest unregulated ivory market, allowing wildlife criminals to launder massive amounts of illegal, much of it originating primarily from poached African elephants. This year alone, Thai Customs made eleven seizures out of which two were major ivory seizures of over four and three tonnes each.

Thailand has faced intense global pressure to shut down its national ivory market. Faced with the threat of international trade sanctions under the Convention on International Trade in Endangered Species (CITES), the government crafted and implemented a National Ivory Action Plan. The destruction reinforces Thailand's commitments to follow through on the plan and will be included in a progress report to the CITES Standing Committee in mid-September.

Earlier this year, Thailand also passed the Elephant Ivory Act aimed at regulating the legal market in ivory from domesticated, privately owned Asian elephants that requires owners and traders to register their ivory. More than 44,000 Thais registered over 220 tons of elephant ivory by the deadline on April 21. The government has also prohibited the trade and sale of ivory from African elephants by enacting an amendment to the country's existing Wild Animal Reservation and Protection Act, making African elephants a protected species in Thailand.

"Considerable progress has been made this year but there will be challenges ahead with implementing regulations, clamping down on illegal traders and reducing demand," added Ongsiriwittaya.

WWF remains concerned about how legal ivory and retail sellers will be tracked under the new system, and what type of sales certificates will be produced for retail customers. Important questions remain about how the Thai government will be able to enforce its new ivory laws, how future stocks and retail markets will be inspected and what penalties will be given to non-registered ivory retailers and traffickers. 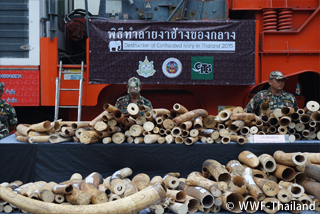 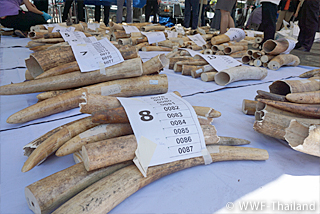 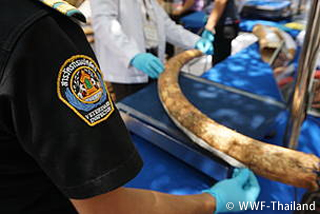