In less than eight months, humanity has used up nature's budget for the entire year, according to data from Global Footprint Network.

Earth Overshoot Day - this year falling on August 13 - marks the date when humanity's annual demands on nature exceed what Earth can regenerate in that year, and has moved up from early October in 2000.

"We are ever deepening our understanding of how crucial nature's services are to our own well-being, prosperity and happiness, and to our very survival," said Marco Lambertini, Director General, WWF International.

"We must continue to shift from being irresponsible exploiters to being careful stewards of nature's values and good managers of her essential, finite resources," said Lambertini.

The costs of ecological overspending are becoming more evident by the day, in the form of deforestation, drought, freshwater scarcity, soil erosion, biodiversity loss and the buildup of carbon dioxide in the atmosphere. Carbon sequestration makes up more than half of the demand on nature.

Government decision-makers who factor these growing constraints into their policy making will stand a significantly better chance to set their nation's long-term economic performance on a favorable track.

"Humanity's carbon footprint alone more than doubled between 1961 and 1973, which is when the world went into ecological overshoot. It remains the fastest growing component of the widening gap between the Ecological Footprint and the planet's biocapacity," said Mathis Wackernagel, President of Global Footprint Network.

Global Footprint Network is an international sustainability think tank with offices in North America, Europe and Asia, that tracks humanity's demand on the planet - the Ecological Footprint - against nature's ability to provide for this demand, known as biocapacity.

Carbon footprint is inextricably linked to other components of the Ecological Footprint.

Cropland, grazing land, forests and productive land built over with buildings and roads all compete for space. As more is being demanded for food and timber products, fewer productive areas are available to absorb carbon from fossil fuel. This means carbon emissions accumulate in the atmosphere rather than being fully absorbed.

To curb Ecological Footprint, world governments must come together this December in agreeing a fair, ambitious, global climate deal at COP21, the UN's climate talks in Paris. 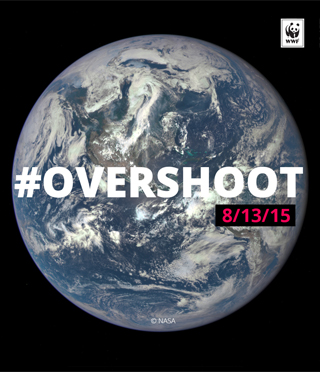